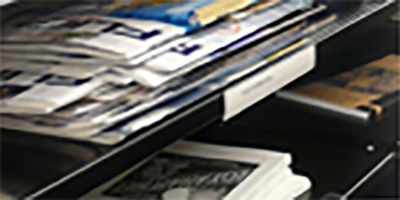 Journal of the History of Economic Thought

European Journal of the History of Economic Thought

Research in the History of Economic Thought and Methodology

Economists' Papers Archive, Duke University. The largest collection in the world of the academic papers of important economists of the past and present. The archive comprises the letters, manuscripts, drafts, and other products of more than sixty distinguished economists, mostly from the 20th century, including the academic and personal papers of several Nobel Prize winners.

History of Economic Thought website. Website started and maintained by Gonçalo L. Fonseca containing profiles of economists and schools of thought, along with links to essays and surveys on economic topics.

AKAMAC E-Text Links. Website created by Michio Akama. Authors can be organized alphabetically or by date of birth. The site links to other sites, and many links are no longer current.

Bentham Project, University College London. The Bentham Project aims to produce a new scholarly edition of the works and correspondence of Jeremy Bentham. Thousands of manuscript items have been digitized and are available for viewing.

Economists' Papers: Preserving Economic Memory. An updated and electronic version of a finding aid originally published in 1975 as Economists’ Papers, 1750-1950: A Guide to Archive and other Manuscript Sources for the History of British and Irish Economic Thought.

US National Archives. The National Archives and Records Administration (NARA) is the nation's record keeper and retains important documents and materials created in the course of business conducted by the United States government. Of particular interest to historians of economics are the records in the Presidential Libraries, whose contents can be searched.

Liberty Library of Constitutional Classics. E-texts of many legal or political documents including the Federalist Papers, the Magna Carta, and The Prince. Contains ads.

"Making of America" project. Primary sources in American social history from the antebellum period through reconstruction, including the Atlantic Monthly and Harper's. Search the collection through Cornell University or the University of Michigan.

Internet Archive. Non-profit digital library of internet sites and other cultural artifacts in digital form, including videos. Contains images of thousands of texts in the public domain.

Hathi Trust. Millions of titles digitized from libraries around the world.

European Society for the History of Economic Thought (ESHET)

Latin American Society for the History of Economics

Society for the History of Economic Thought (JSHET, Japan)

US Bureau of Economic Analysis

Thesis. Guides to writing a thesis in the history of economics. In several languages.