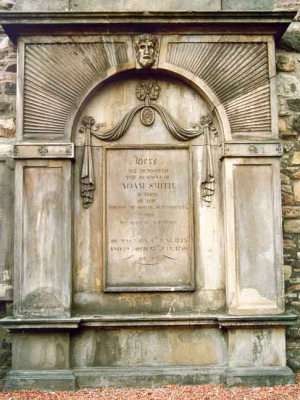 For years, Malcolm Rutherford of the University of Victoria maintained and hosted on his university webpage links to grave sites of famous economists. With Malcolm's kind permission, the HOPE Center is now pleased to maintain and host his original content on our own site.

Malcolm's original headnote read as follows: "This web page contains details of the grave sites of famous economists. Where possible original photographs are included; otherwise a link is provided to pictures available on findagrave.com or on another site. I have also provided links to Wikipedia pages concerning the economists listed and to the graveyards or churches where they can be found. Wikipedia entries are not entirely reliable, but I was struck by how may of the economists listed here have Wikipedia pages. Perhaps by including these links some of my colleagues in the history of economics might be motivated to improve the entries on Wikipedia. I am also always interested in new pictures and information on the whereabouts of other famous economists. Special thanks go to Ian Preston for pictures and information. See his Economic Walks pages."

Information is assembled in the tabs below. Click on the blue bar to view Economists whose last name begins with the letters indicated.

His ashes were scattered off The Cobb, Lyme Regis, England, where he had a cottage.

Turgot is buried beneath the chapel floor of the Laennec Hospital (known even earlier as the Hospice des Incurables), 42 Rue de Sevres, Paris. The chapel courtyard contains a memorial bust, a picture of which can be found on the French Wikipedia page for the Laennec Chapel.

"Ardzrooni and Davenport, who was in Palo Alto at the time, were at a loss as to Veblen's wishes in the matter of burial. They decided to have him cremated and scatter the ashes over the Pacific Ocean. Later Ardzrooni found a piece of writing in Veblen's papers which indicated that the funeral arrangements accorded with Veblen's wishes. The note was unsigned, written in pencil probably within a week of his death:It is my wish, in case of death, to be cremated, if it can conveniently be done, as expeditiously and inexpensively as may be, without ritual or ceremony of any kind; that my ashes be thrown loose into the sea, or into some sizeable stream running to the sea; that no tombstone, slab, epitaph, effigy, tablet, inscription, or monument of any name or nature, be set up in my memory or name in any place or at any time; that no obituary, memorial, portrait, or biography of me, nor any letters written to or by me be printed or published, or in any way reproduced, copied or circulated."(Joseph Dorfman, Thorstein Veblen and His America, p.504)