History of HOPE at Duke 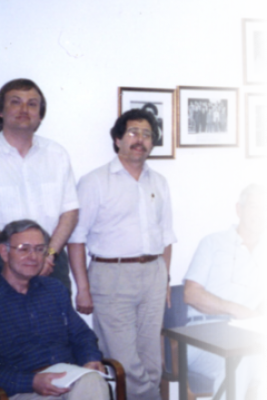 Interest in the history of economic thought at Duke is just about as old as the university itself. During the 1930s, two of the first economists to join the university introduced the field at the graduate level: Earl Hamilton specialized in the history of money and prices, while Joseph Spengler emphasized the history of demography. They were soon joined by one of their earliest Ph.D. students, Robert S. Smith, who remained after graduation to teach at Duke and to work on Spanish and Latin American economic thought.

A Journal Is Born

Hamilton left Duke for Northwestern in the 1940s. When Craufurd Goodwin joined the faculty in 1962, the History of Political Economy (HOPE) Group was restored to three. The group began planning the first specialized journal in the history of economics with Smith as its first editor.  Goodwin recalls that when he announced the new journal to the British History of Economic Thought meetings at the University of Sussex in January 1968, Lionel Robbins, who insisted that the history of economics should be published in mainstream journals, objected: “I will instruct all my pupils not to publish with you.” Goodwin suggests that the opposition of a grand old man of economics generated such an outpouring of sympathy that submissions were guaranteed for some time.

In 1968, Smith died suddenly. By the time that the first issue of History of Political Economy appeared, published by the Duke University Press, in 1969, the editorial torch had passed to Goodwin. Goodwin’s tenure is believed to be the longest of any editor of an economics journal, exceeding even that of John Maynard Keynes, who served thirty-two years as editor of the Economic Journal. After forty years as editor, Goodwin retired in 2010, when Kevin Hoover took over the editing of the journal.

Duke and the History of Economics Society

The Duke HOPE Group was also closely involved in the founding of the History of Economics Society, which had its first annual meeting at the nearby University of North Carolina in May 1974.  Two of the founders, James Cochrane of the University of South Carolina and Vincent Tarascio of UNC, had maintained a close relationship with the Duke HOPE Group for some time.  Since four of the first dozen presidents of the HES were Duke faculty (Joseph Spengler, Craufurd Goodwin, A.W. Coats, and Martin Bronfenbrenner), the society’s membership may have begun to tire of Durham as the site of its meetings. Spengler’s contributions to the field and to HES are commemorated in the society's annual Joseph Spengler Book Award for the best book in the history of economics.

Growth in the Faculty

The 1970s were a time of turnover and stabilization. Neil De Marchi was recruited from the Australian National University, where he had just received his Ph.D. E. Roy Weintraub came to Duke in 1970 as an economic theorist, but increasingly his interests turned to the history of economics. His serious engagement with the field in the 1970s helped to fill the void opened by Spengler’s retirement in 1972. In 1985, A.W. (“Bob”) Coats of the University of Nottingham joined the Duke faculty half time, adding an international dimension. This arrangement continued until 1994.  Throughout this period, the activities of the HOPE Group were supported and enriched by a number of other Duke faculty, notably Vladimir Treml, Martin Bronfenbrenner, Edward Tower, William Yohe, and David Davies, as well as by distinguished visiting scholars.

Up until the 1990s, the HOPE Group typically supervised one or two doctoral students at any time, with a number of them moving on to careers as distinguished historians of economics. In recent years, with changing tastes and directions in the wider discipline of economics, fewer students have specialized in the history of economics. Nevertheless, students continue to write history chapters as part of their theses and to publish historical papers in HOPE.

The late 1980s and early 1990s were a period of institution building. Since the late 1980s, Duke's David M. Rubenstein Rare Book and Manuscript Library has developed an unparalleled collection of the academic papers of important economists and economic organizations. The collection began with the papers of the Keynesian economist, Sidney Weintraub, in 1983. By 1985, a steering committee within the HOPE Group was set up, and collecting for what is now known as the Economists’ Papers Archive began in earnest. One of the earliest significant acquisitions were the papers of the seminal Austrian economist Carl Menger, as well as those of his son, the mathematician Karl Menger. The collection grew into the the largest such collection in the world.  It now includes the papers of several Nobel Prize winners, as well as those of many other important economists. It is also the official repository of the papers of the American Economic Association and the History of Economics Society.

In 1989, a conference was held based around the Menger papers. The proceedings of the conference were published as a special issue of HOPE in 1990. This conference was the beginning of another enduring institution: modeled after the Gordon Conferences in the Sciences, the HOPE conferences, to which a select group of scholars is invited to focus on a topic in the history of economics, have taken place each April for nearly two decades. The papers of each of these conferences are published as supplemental issues of HOPE.

As well as the conferences and the Economists’ Papers Archive, the Duke HOPE Group coordinated (jointly with the Departments of History and Political Science) a program on the History of the Social Sciences funded by the National Science Foundation. Craufurd Goodwin initiated and edited a monograph series, published by Cambridge University Press, Historical Perspectives on Modern Economics, which has included many of the pioneering works in the field. Roy Weintraub cofounded a monograph series, Science and Cultural Theory, which has published several books in the history and philosophy of economics. Finally, Bruce Caldwell serves as the editor of The Collected Works of F. A. Hayek.

Beyond these activities, in a tradition that goes back to its earliest days, various other members of the Economics Department, as well as interested colleagues in Political Science, History, Literature, Public Policy, and Philosophy, contribute significantly to its success.

With Kevin Hoover joining the Department in 2006, the core membership increased to four full-time, permanent faculty for the first time in its history. Then in a development that bodes well for the future health of the group and the field, Bruce Caldwell was hired in 2008 as a research professor and the founding Director of the Duke Center for the History of Political Economy. The Center, founded with a significant grant from the John W. Pope Foundation, aims to promote and support research in, and teaching of, the history of economics. It supports an active Visiting Scholars program, a regular Workshop series, a HOPE Lunch series for the discussion of work in progress, special events, a summer Teaching Institute, and, with Duke University Press, the annual History of Political Economy conference.

With the additional programming of the Center, along with the hiring of Steven G. Medema and Jennifer Jhun as faculty fellows, the place of the history of economics at Duke University seems assured.