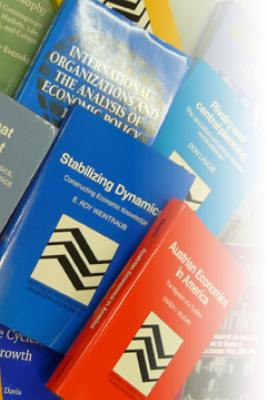 Published by Duke University Press as hardbound conference volumes and annual supplements to the History of Political Economy, these volumes have since 1989 served as the proceedings of the important HOPE Conferences.  Each volume is edited by the conference organizers, who are drawn from members of the HOPE group and notable historians of economics from around the world.

The Collected Works of F. A. Hayek

Published by the University of Chicago Press and Routledge, and co-edited by Bruce Caldwell, the series comprises definitive editions of the essential writings of the Nobel laureate and social theorist Friedrich A. Hayek.

Published by Cambridge University Press. This series, whose founding editor was Craufurd Goodwin, is currently edited by Harro Maas. The series comprises books by distinguished historians of economics.

Oxford Studies in the History of Economics

Published by Duke University Press and co-edited by E. Roy Weintraub, the series comprises books in science studies and the history of science, including the history of economics.