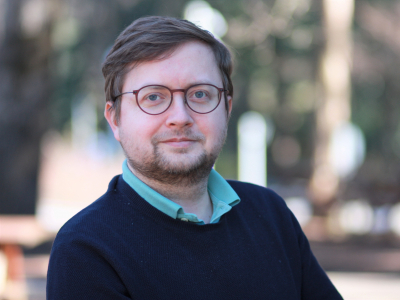 From its small beginnings in the 1960s, experimental economics, which uses experiments to understand how people make choices or markets operate, has become an established field in the discipline, and no historian has more scrupulously chronicled the beginnings and evolution of the field than Andrej Svorenčík.

Over the past decade, Andrej, a 2021–22 HOPE Center Visiting Scholar, has interviewed nearly ninety people who have been directly or indirectly involved with experimental economics, including several of the field’s most important figures—Reinhard Selten, Charles Plott, and Alvin Roth, and of course the economist who started it all, Vernon Smith.

The interviews have taken place all over the globe—the United States, Austria, Germany, Italy, Switzerland, the UK, Israel, Abu Dhabi, the Netherlands. Many of the interviews occurred at conferences, and a few were conducted over lunch, such as the 2019 interview with Daniel Kahneman.

“I interviewed Kahneman in June in his penthouse apartment in New York. He asked, ‘Would I like pizza or some really good Japanese food?’ By then, I had learned that, when interviewing someone over lunch, it’s best to have food that comes in small pieces. So Japanese it was.”

Andrej is now writing a book on the history of experimental economics. The book will build on his dissertation, which he defended in 2015, and the articles he has published since then.

There’s an art to conducting interviews, Andrej has learned. Always tell a subject ahead of time what question will be asked first. “And always tell them what you are going to do and how you’ll be doing it. For example, I tell people that I’ll be checking my recorder from time to time to make sure it’s working properly. It’s important that they know I’m not doing it because I’m bored.”

Any interview will have its lulls, and a good interviewer will learn to use silence to his advantage. “A lot of people are so uncomfortable with silence that they’ll force themselves to start talking again.”

But most of all, the interview should be a conversation, and a conversation between equals at that. “I’m not there to extract information from them or laud their achievements. I’m there to have a discussion about the past with them, and to explore what they remember.”

When asked what he has learned from his research on experiment economics, Andrej, who is a postdoctoral researcher at the University of Mannheim, says it is how new methods and approaches always begin with a small group of early practitioners who eventually convince the larger discipline to accept and adopt what they are doing. “Experimental economics is a case study of that fascinating process, the move from small to large that characterizes so many areas of the discipline.”