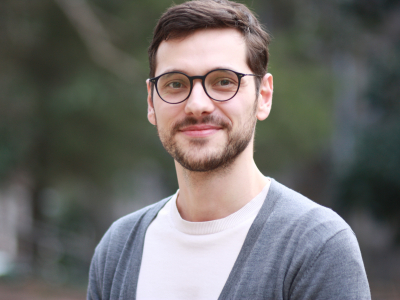 One of the most significant developments in economics over the past fifty years has been the rise of game theory, which uses mathematical models to determine how “players”—for instance, consumers, businesses, or political adversaries—respond and react to each other’s potential or actual decisions and actions.

Today, game theory, like all facets of economics, is taught largely by asking students to solve the kinds of problems one normally finds at the ends of chapters in textbooks. But as Thiago Graciani, a 2021–22 HOPE Center Visiting Scholar, explains, the character of those problems has changed over the years, and it is precisely those changes that Thiago is attempting to trace in his current research.

Duke is the perfect place for him to conduct his research. The library contains a wealth of textbooks—not only in economics but in other disciplines—that feature discussions of game theory.

“In the 1950s and even 1960s, game theory was wandering around, without a disciplinary space of its own. So in economics textbooks, statistics textbooks, linear programming—one can find game theory in all those places.”

Thiago has lately been intrigued by an important concept in game theory known as the Shapley value, which identifies certain solutions to cooperative games. But as Thiago explains, although the Shapley value has advantages over the well-known Nash equilibrium, it is largely overlooked in most modern textbooks on game theory.

“What happened to the Shapely value? Why don’t we see it in textbooks anymore? There’s a story there to tell, and I hope to find what it is.”

It’s only natural that Thiago is writing about economics and game theory in particular, as his original love was mathematics. “For me, it’s the theory and proofs that make game theory so compelling,” he says. “I would have definitely been a pure mathematician had I went into that field.”

A native of Brazil and a PhD student at the University of São Paulo, Thiago had his first experience with snow this January. “And there are a lot more hills here than I expected.”

Thiago will return to São Paulo in April.