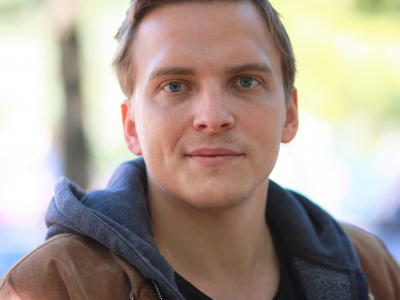 The housing bubble of 2007. The dotcom bubble of the late 1990s. The Tulipmania of the 1630s. Conventionally, those are regarded as major episodes of irrational behavior.

But as Thomas Delcey, a 2021-22 HOPE Center Visiting Scholar, explains, at least one subfield of economics—financial economics—suggests that they were actually rational responses to the market fundamentals of the time.

“Financial economics is changing the way we do economics, and the questions economics asks,” Thomas says. “And it’s challenging what economics views as irrational behavior.”

Thomas is researching the origins and rise of financial economics, which deals with such things as asset pricing, the corporation, and portfolio management.

The subfield emerged in the 1960s. But its roots go back to the early part of the century and especially to the agricultural economists of the interwar period. As Thomas describes in a paper he presented earlier this semester, those economists were interested in the relationship between the circulation of market information and the changing prices of commodities such as cotton and corn.

“I view agricultural economists as early financial economists, with their interest in information and forecasting,” Thomas says.

Financial economics is largely the province of business schools, which, not coincidentally, are becoming increasingly important sites of economics research and knowledge production.

“There’s a lot of econ teaching and research going on in business schools,” Thomas says, “and has been for some time.” In 2004, for instance, the Committee on the Status of Women in the Economics Profession, which annually collects data on the share of women recruited into the profession, reported that business schools were as important an employer as traditional economics departments.

Thomas’s interest in financial economics began when he was an undergraduate student in 2010—when the Great Recession was still playing itself out.

“With just a little bit of irony, some of my econ teachers told me I was lucky to be living through the kind of event that occurs only once or twice a century.”

Thomas began by trying to understand the idea of market efficiency and the many ways it was defined and understood. It wasn’t long before he broadened his scope to financial economics.

This is Thomas’s second visit to Duke. He spent two months here in the spring of 2017 reading Paul Samuelson’s correspondence relating to financial issues.

His first visit prepared him for his current visit.  He says Durham may not be the most pedestrian- or bike-friendly town, but the city still has a lot to offer. He has fun mixing French with the smoky and spicy Southern cuisine. "Plus, this time I got an apartment that's within walking distance of a grocery store."

Thomas will return to France in April.