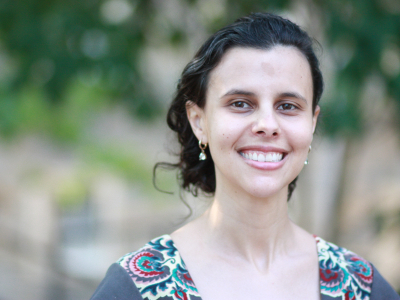 Sometime around 1900, an American economist named Henry Ludwell Moore walked into a bookstore in Geneva and made what was perhaps an unusual request: he asked the owner of the store for a photograph of the well-known French-Swiss economist Léon Walras.

The owner wrote to Walras, who happened to be on the lookout for disciples who would further develop his ideas, especially his model of general equilibrium, which represented all the markets in an economy rather than just a single market. Walras would find such a disciple in Moore.

It is those disciples, the followers of Walras, who have attracted the scholarly interest of Lúcia Centurião, a 2021-22 HOPE Center Visiting Scholar.

“Today we regard Walras as one of the most important economists ever. But in his day, in the late 1800s, he had trouble finding people who would continue his work,” Lúcia says.

Part of the problem, as Lúcia explains, was Walras’s extensive use of mathematics at a time when economic questions were still primarily treated philosophically or historically, in a literary style.

“But it didn’t help that Walras had a difficult personality. He could come across as arrogant and egotistical,” Lúcia, a PhD student at the University of São Paulo, says.

Lúcia’s dissertation, which she plans to finish during her tenure at Duke, examines three of Walras’s followers. Albert Aupetit integrated money into Walras’s general equilibrium model. Étienne Antonelli used his teacher’s model to explore the development of the capitalist system. And Moore applied statistical techniques to general equilibrium theory.

Moore is often considered the father of statistical economics.

Lúcia is currently writing a chapter on the books from which Moore learned economics. “How was general equilibrium theory presented in the textbooks of the time? What insights do the books give into Moore’s approach?”

While in the States, she also plans to visit the archives at Columbia University, where Moore’s papers are held.

It is only natural that Lúcia found her way to the HOPE Center. Her dissertation advisor, Pedro Garcia Duarte, completed his PhD in economics here with a dissertation on monetary policy.

Lúcia grew up in the Brazilian city of Araraquara, which is about the same size as Durham. “So Durham immediately had a familiar look and feel to me,” she says.

She is looking forward to discussing her work with the other fellows and the faculty at the HOPE Center. “I’ve written what I’ve written, and now it’s time to get some feedback on it.”

Lúcia will return to São Paulo in February.