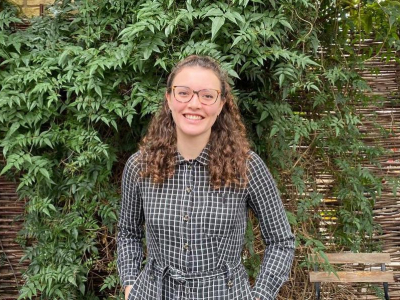 Economists perhaps say little today from a professional standpoint about global warming and climate change. But around fifty years ago a small group of well-known economists attempted to bring environmental issues to the forefront of the discipline.

“Economists like Nicholas Georgescu-Roegen, Kenneth Boulding, and E. F. Schumacher were visionaries of what human society should look like, a vision that took seriously climate issues, overpopulation, and excessive industrialization,” says Hester van Hensbergen, a 2020–21 HOPE Center fellow who is writing about the work of those economists.

In the 1970s, the three economists drafted a statement of intent and presented it to the American Economic Association, exhorting the discipline to embrace the environmental crisis and create a subfield devoted to ecological issues.

At the time, most economists were confident that humans, being rational actors, would come up with a technological solution before it was too late. But Boulding, Schumacher, and Georgescu-Roegen were not so sure.

Perhaps the most radical among the three was Georgescu-Roegen. As Hester explains, the Romanian-born economist thought that the world needed to depopulate and to return to a more agrarian life. He even argued that the world’s scarce natural resources should be distributed globally according to need.

“Georgescu-Roegen wanted to reground our conception of economics in ecological realities, and he didn’t think well-being could be measured by something as simple as economic growth.”

Hester’s work took her on a tour of US archives in the fall of 2019—the New School, Colorado, Michigan, Swarthmore, and of course Duke, whose Rubenstein Library houses the papers of Georgescu-Roegen.

Because of COVID restrictions, Hester is completing her fellowship remotely, while living in London. She is a PhD student at King’s College Cambridge.

“In normal times, I’d take the train to Cambridge from London. The train is only an hour from King’s Cross station, and once I arrive in Cambridge, it’s a nice walk through the botanical garden to King’s.”

“With Keynes’s connection to Bloomsbury, there’s lots of Bloomsbury art knocking about the offices here,” she says.

And, as this interviewer notified her, in North Carolina: the late Craufurd Goodwin, a Hillsborough resident, was an avid collector of works by Duncan Grant and other Bloomsbury artists.

“Another reason I’m so sorry to be stuck in London!” Hester said.

Hester hopes to complete her PhD by early summer 2021.