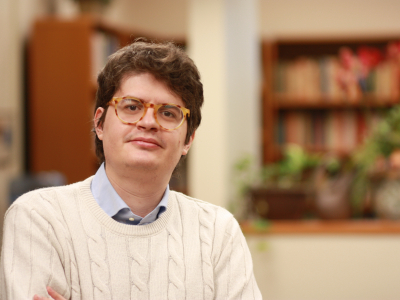 Many historians of ideas are today interested in the interactions between disciplines. How did the tools and theories that originated in, say, economics spread into sociology or political science?

Take game theory, which entered economics in the 1940s and, largely through the efforts of one man, William Riker, eventually became a fixture in political science. It is that story—the story of Riker and his efforts to apply game theory to problems in political science—that fascinates current HOPE Center fellow Gianluca Damiani.

“Riker operated at a time when most of political science wasn’t even mathematical, let alone using game theory,” Gianluca says. “I want to understand how someone going against the grain like that could succeed in transforming his own discipline.”

Game theory deals with strategic interactions between rational decision-makers. Perhaps the best-known example is the prisoner’s dilemma, which shows why two individuals might not cooperate, even if it appears in their best interests to do so.

While at Duke, Gianluca is combing the papers of the late economist Martin Shubik, who was a leading proponent of game theory, and the papers of Lionel McKenzie, who was at the University of Rochester at the same time as Riker.

Gianluca was delighted to discover in Shubik’s papers a referee report on what became Riker’s 1962 book The Theory of Political Coalitions. In the book, Riker used game theory to formalize political theory.

“I had no idea that Shubik had been a referee for Riker’s book. Finding that out and reading his report provided some unexpected insights into game theory and Riker’s work,” Gianluca says.

Gianluca, who is a PhD student in political science at the University of Florence and the University of Turin, is also benefiting from conversations with one of the Center’s faculty members, Roy Weintraub, a leading authority on the use of mathematics in economics.

“It’s that ongoing community, both past and present, that make the Center a special place,” Gianluca says.

Gianluca, who was born in Milan and raised in nearby Gorgonzola, will return to Italy in April.