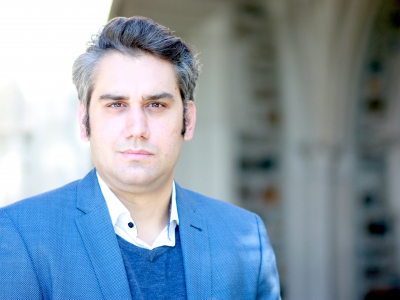 In the 1920s and 1930s, a new generation of economists in Germany were trying to emancipate themselves from the influence of the German Historical School, which emphasized the collection of empirical data and denied that there were universal economic truths.

It is in that context that Lachezar Grudev, a 2020–21 HOPE Center fellow, places his current research on the German-born economist Friedrich A. Lutz. Lutz was the most successful student of Walter Eucken, who was the head of the Freiburg School and whose ideas shaped economic policy in Germany after the Second World War.

“That makes Lutz’s role in context of the formation of the Freiburg School in the 1930s most interesting,” Lachezar says.

Lutz was part of an ongoing methodological discussion in interwar Germany about the role of economics and the right way to conduct economic research. “Lutz and his contemporaries more and more saw the value of theory, which the German Historical School saw as irrelevant,” Lachezar says.

It was for that reason that Lutz left Germany in the late 1930s for England where he established life-long contacts with fellow economists Friedrich A. Hayek and Lionel Robbins and met his future wife Vera Smith, one of Hayek’s doctoral students. In 1938, Lutz left for the United States, where he was hired as an instructor at Princeton University.

“At the time, the theoretical work coming out of England and the United States was inconsistent with the Nazi view of how an economy worked and its function in society,” Lachezar says. “What’s more, the Nazis made it nearly impossible for economists in Germany to get their hands on that work.”

In short, Lachezar explains, Lutz needed to leave in order to learn the kind of theoretical work to which he was committed.

While at Duke, Lachezar will be in conversation with the many historians of economics, as well as scholars in disciplines such as philosophy and political science, who work on German intellectual life of the 1920s and 1930s. He is also consulting some of the collections in the Economists’ Papers Archive, which is housed in the David M. Rubenstein Library. The papers of Oskar Morgenstern, who was a colleague of Lutz’s at Princeton, should be particularly valuable.

Lachezar was born in a small town in Bulgaria but has spent the past fourteen years in Freiburg, where he completed his undergraduate work and where he is now a PhD student. “Freiburg is next to the Black Forest, where I go on many hikes,” Lachezar says. “Those hikes are my way of de-stressing, especially during the pandemic.”

Lachezar is in the final year of writing his dissertation and will return to Freiburg in March.