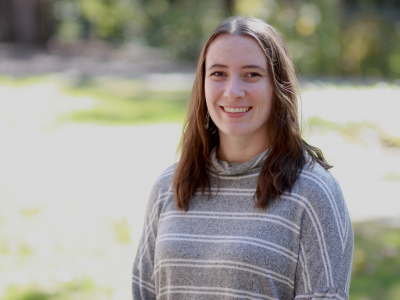 New possibilities often open through chance events. For Sarah Small, a 2020–21 HOPE Center fellow, the event was seeing a poster outside a professor’s office advertising the journal Feminist Economics.

That event set her scholarly life in motion. Sarah is now a fifth-year PhD student at Colorado State University, writing a dissertation on feminist economics and the late economist Barbara Bergmann.

As Sarah explains, feminist economics is a multifaceted field, addressing such topics as wage gaps, occupational segregation, and the division of unpaid work in the home. “Broadly speaking, feminist economics looks at the ways in which economics has been ‘male-centered,’ meaning centered on norms and points of view that readily suggest themselves to the men who do economics,” Sarah says.

Looking at the economy from a feminist perspective can lead to new ways of thinking about things. As an example, Sarah points to Barbara Bergmann, whose work explored what is known as the occupational crowding hypothesis.

“Basically, Bergmann argued that women and minorities are shunted or crowded into certain, often low-wage, occupations, so that there’s less competition for white men in high-wage occupations,” Sarah explains.

The general idea had been around for quite a while. But it was Bergmann who, in the 1960s and 1970s, worked it up into a theoretical model.

At Colorado State, Sarah has a front-row seat to the latest scholarship published in Feminist Economics. One of her advisers there, Elissa Braunstein, is an editor of the journal.

Sarah’s interest in economics began in high school, where she read Freakonomics for a class. She continued to take economics classes in college, and when she saw the poster for Feminist Economics, she knew she’d eventually study the subject in graduate school.

She’s also managed to explore a little of Durham and has gone for some hikes at the Eno River State Park.

Sarah will return to Colorado State in April.