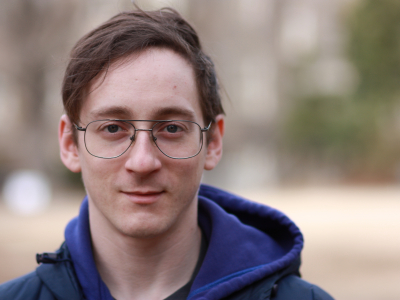 And observes. And takes notes. Lots of notes.

A 2014–15 fellow of the Center for the History of Political Economy, Adam is an anthropologist who is studying the professional behavior of economists. His current work focuses on Russian economists, especially the mathematical economists who emerged on the scene beginning in the 1950s. He spent two years, 2010 to 2012, in Russia, “hanging out,” as he puts it, with economists, going to job talks and faculty meetings, seminars and conferences, but mostly conducting interviews.

It is through a focus on economists that Adam is seeking to illuminate the particular kind of liberalism that began slowly developing in Russia in the 1950s and that culminated in the breakdown of the Soviet system in the early 1990s. As he puts it, “How can I tell a story about the emergence of Russian liberalism through a deep cultural history of mathematical economics?”

Anthropologists have paid a lot of attention to the hard sciences and to political systems. But very few have looked at social scientists, and none at economists in particular, let alone at Soviet and Russian economists, as Adam is doing. But such a focus is important, he explains, not only in understanding the Russian situation but also, on a broader level, the intertwined fates of liberalism and socialism in the twentieth century and hence the larger political realities of the present age.

Adam’s first significant engagement with economists was at the HOPE Center’s 2011 Summer Institute. There, he encountered economists who knew very little about the history of their field, which was strange to him, though not unexpected. As he explains, the education of an anthropologist is through the history of anthropology. Then again, the economists who attended the Summer Institute knew economics to a degree far greater than he did. “I remember talking to one classmate about Slutsky decomposition for four days,” Adam says. “He understood the issue in a deep way that I could only dream of.”

Adam is finishing writing his PhD dissertation at the University of Pennsylvania. He has high standards for his work and wants it to satisfy not only anthropologists but historians and economists. Spending a year at the HOPE Center allows him to learn not only from the faculty here but from the numerous visitors to the Center.

“It’s not just their published works,” he says of the faculty and visitors. “They have a tremendous amount in their heads that’s valuable to me, and I need to be here to get it.”