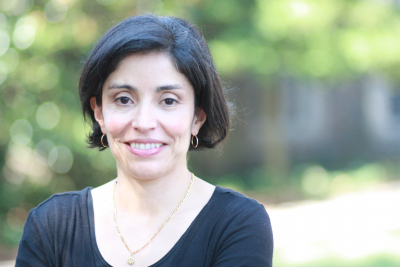 In many ways, the history of economics has been dominated by a European and, more recently, US perspective. But there are now several scholars from Latin America who are looking in a decidedly different direction, tracking down the influence and development of economic ideas, along with tracing the activities of professional economists, in countries such as Brazil, Chile, and Colombia.

One of those scholars is Jimena Hurtado, a 2022–23 HOPE Center visiting scholar who is writing about a group of economics-trained “technocrats” who, since the 1960s, have been working to build a modern republic in Colombia.

Jimena, a native of Colombia, is a professor of economics at the University of the Andes in Bogotá, where many of those technocrats spent a good part of their professional lives—and where several of them still have appointments.

“I’m lucky in that I’m getting to have a prolonged conversation with some of those technocrats—and they are now interested in telling their story,” Jimena says.

Indeed, as Jimena explains, there is a tradition in Colombia dating back to the nineteenth century of lawyers and other members of the professional class turning to thinkers such as Jeremy Bentham and Jean-Baptiste Say for ideas about statecraft and political organization.

“What unites people like Ezequiel Rojas, a prominent political figure in nineteenth-century Colombia, and the technocrats of today is their pragmatism,” Jimena explains. “For them, the ultimate test of an idea is not whether it is right; it is whether it is useful, whether it can help them develop better economic policies.”

According to Jimena, the story of today’s technocrats—among them are José Antonio Ocampo (the present Finance Minister) and Alejandro Gaviria (the present Education Minister)—is one of identity. Many people regard them as “neoliberals”—a dirty word in Latin America. But the technocrats see their mission not as one of promoting markets but as one of stabilizing the economy. In that, they have been successful: Colombia has had the most stable economy in the region in recent decades.

Jimena, who describes Bogotá as a “rainy, gray” city, has come to appreciate the sunny weather in Durham, as well as all the amount of space everywhere. “Here, it’s been easy to focus on my work and to draw a lot of energy from the other visiting scholars, Friday guest speakers, and the faculty.”

Jimena will return to Bogotá later this fall.