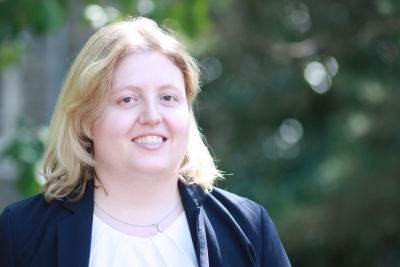 For Hannah Tyler, a 2022–23 HOPE Center visiting scholar, her interest in agricultural economics began with a grant from the Swiss National Fund to generate a database of recipients of Rockefeller Foundation grants. In the course of her work, she created an inventory of economists who had received Rockefeller money—and began to notice something interesting.

“By far the biggest group of recipients were agricultural economists and Farm Bureau people,” Hannah says. “There were nearly 500 of them. I started looking into them more closely, and before I knew it, I had a dissertation topic staring me right in the face.”

An important step on the way was a meeting at Wisconsin in the summer of 2019 with the noted agricultural economist Daniel Bromley.

“Professor Bromley started me on a good path by pointing me to people who have become prominent in my thesis,” says Hannah, a third-year PhD student at the University of Lausanne.

Her dissertation examines the data-collection methods of agricultural economists in Germany and the United States between roughly 1910 and the start of World War II.

As Hannah explains, economists in the two countries took different approaches. In Germany, they were mostly interested in farm accounting data—the records farmers kept about how much they spent on such things as tools, machinery, and seeds and how much they earned from selling their crops. In the United States, economists were mostly concerned with estimated production and hence focused their efforts on developing and administering surveys that sought to determine how much corn, wheat, and other crops would be planted and harvested.

While at Duke, Hannah will take advantage of the large number of books on US farming and related subjects held in Perkins Library—she mentions Henry and Anne Dewees Taylor’s The Story of Agricultural Economics in the United States, 1840-1932 as an example—as well as access electronic sources of statistics such as those from the Chicago Board of Trade and the US Department of Agriculture that are unavailable from her home base in Switzerland.

But what she has found at Duke goes beyond the library and internet. “The support for writing that the HOPE Center provides is tremendous. Academic life can be a solitary one, but there’s a real community here.”

Hannah has done her part to build that community. She rents a house near the Duke Homestead with four other visiting scholars. “Not a day goes by when we don’t talk about the papers we’re writing and the presentations we’re going to make.”

Hannah will return to Lausanne at the end of the spring.