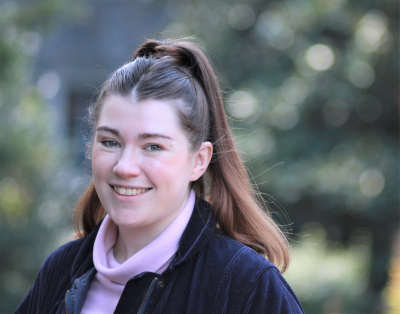 Two years into an undergraduate program at Cambridge, Emily Evans switched majors from economics to politics and soon found herself utterly fascinated with the political theory and Marxist thought of the Frankfurt School, a self-avowed leftist group of thinkers who, in between the two world wars, were determined to develop a theory of society based on the writings of Karl Marx and Friedrich Hegel.

The members of the school “loomed large in my imagination,” Emily, a 2022–23 HOPE Center Visiting Scholar, says, “especially the early members who were forced out—people like the first director of the school, Carl Grünberg, who wanted to revive the Marxist critique of political economy and prove that capitalism would collapse.”

That interest led Emily—after a year working for the Labour Party—to pursue a master’s in political thought and intellectual history at Murray Edwards College at Cambridge, eventually writing a thesis on the research organization of the Frankfurt School, the Institute for Social Research, founded in 1923 by Felix Weil.

So she learned to read German, and eventually to speak it too, thanks to a language course she took in Germany last year.

Emily is now a PhD student at Trinity Hall, Cambridge, writing a dissertation on the way in which German Marxists in the decades leading up to 1933 engaged with and theorized about German economic thought.

She’s nearly finished; while at Duke she’s working on the last chapter, which will trace the legacy of these formative confrontations between German economists and German Marxists in American debates after the migration of many intellectuals and socialists to the United States in the 1930s and 1940s.

One chapter of Emily’s dissertation deals with Rosa Luxemburg, the Polish-born economist who was murdered in 1919 by a German paramilitary group for fomenting a communist uprising.

“I just love her work—it’s so beautiful and passionate. And even though she writes in German, she writes with a light touch. She was one of the few Marxists who had the formal economic training to engage seriously with Marxist economic thought.”

In her short time in the United States so far—"Forty-six days now, so longer than Liz Truss lasted”—Emily has been surprised by the cultural differences she’s noticed in the places she’s visited.

Emily will return to Cambridge in April.