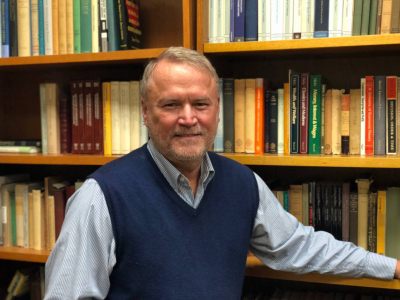 Friedrich Hayek may have won a Nobel Prize in economics, but as his biographer, Bruce Caldwell, explains, Hayek was interested in much more than the standard concerns of economists.

Ten years in the making and the first of what will be two volumes, Professor Caldwell’s Hayek: A Life, 1899–1950 was published in November by the University of Chicago Press. Written with Hansjörg Klausinger, a professor of economics at Vienna University of Economics and Business Administration, the biography captures what was truly a multifaceted life, one that saw Hayek write substantial works on such subjects as psychology, political theory, history, philosophy, and methodology.

“Hayek was a free market economist, yes, but he was also very much a social theorist,” Professor Caldwell says. “This first volume traces his development over the first half of his life, not just in terms of his academic interests, but also as a person growing up in fin-de-siècle Vienna, fighting in the First World War, then dealing with the various social, political, and economic disruptions that followed the war’s end.”

Those disruptions in the interwar period were numerous and often cataclysmic. Hayek lived through the formation of the Soviet Union and the dismantling of the Austro-Hungarian Empire, a great postwar hyperinflation in Austria and Germany that was followed everywhere by the Great Depression, and the rise of fascism and virulent strains of antisemitism in Central Europe.

Although in recent years Hayek has been a favored figure of the political right, Professor Caldwell, who since 2002 has been the general editor of Hayek’s Collected Works, says that Hayek is best described as a liberal in the European sense—someone committed to a system of free markets, within a democratic polity, with strong constitutional protection of individual rights.

Explaining how he got to that position is part of the story of the biography. Hayek grew up in a conservative upper-middle-class milieu with limited contact outside of a small circle of family and friends. His father was a medical doctor whose passion was botany, and much of Hayek’s early education centered on natural scientific pursuits.

His horizons expanded dramatically through his wartime service, his subsequent education at the University of Vienna, and a trip to the United States in 1923–24.

“During his university days Hayek discovered the Jewish intelligentsia of Vienna, whose education had been far more cosmopolitan than his,” says Professor Caldwell, whose 2004 book, Hayek’s Challenge, explores Hayek’s methodology. “Then he went to New York. He hated it there! But it was all part of the further education of Fritz Hayek.”

Through all of it, though, “Hayek was very much his own man,” Professor Caldwell says.  He gradually became an economist but also a committed liberal, the latter causing a certain amount of familial strife.

“Coming from a very conservative family, he ended up having many political disagreements with them, especially in the 1930s when he was living in London and they were in Germany and Austria.”

He was a contrarian in economics as well, criticizing the Keynesian revolution and the welfare state policies that began to emerge following the Second World War. The biography explores how he came to write his most famous book, The Road to Serfdom, and also to found in 1947 the Mont Pèlerin Society, a group of liberal intellectuals.

Over time, Hayek became the ultimate cosmopolite, living in several places and knowing several languages; but he was intensely local too: every year throughout his life he returned to the mountains of his native Austria, where he enjoyed skiing, mountain-climbing, and hiking.

Early work on the biography—this first volume runs to over eight hundred pages—consisted of gathering a plethora of archival material, including a wealth of family correspondence, and identifying just what primary source materials were available. There were trips to archives in London, Chicago, Austria, and California—to name just a few. Professor Caldwell’s coauthor even tracked down Hayek’s school-boy records.

As Professor Caldwell concludes, “Hayek’s was a twentieth-century life, and one of our goals was to place him in the context of the very exciting times in which he lived. It turns out to be a great story.”

Hayek: A Life, 1899–1950 is available for purchase from the University of Chicago Press.