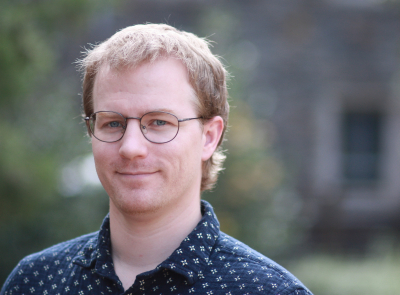 Long gone are the days when science—including economics—was seen as an independent pursuit, unaffected by the political and economic realities of the world.

As Nic Johnson, a 2022-23 HOPE Center visiting scholar explains, the work of economists is influenced and even determined by existing institutions—and by who is paying the bills.

A PhD student in history at the University of Chicago and once a nationally ranked jujitsu artist, Nic is tracing the relationship between institutions, funding, and economics by examining the changing emphases and practices of economists at MIT from the immediate postwar years to the present day.

“MIT economists dominate many of the so-called neoliberal bodies and institutions today,” Nic says. “Yet sixty or seventy years ago, MIT was populated by a bunch of Keynesians—in some ways the very antithesis of today’s neoliberals. How did that happen?”

A big part of the answer, according to Nic, is the shift in funding over the decades.

“In 1969, nearly all of MIT’s funding came from the Pentagon,” explains Nic, who wrote a master’s thesis at Johns Hopkins on the Lucas critique. “And MIT economists were happy to oblige by producing statistical analyses and optimization studies that addressed national security concerns in their broadest sense.”

Military funding to MIT and other universities, however, dried up after the Vietnam War.

“But with the inflation of the 1970s, a new player, the Federal Reserve, stepped in, hiring economists to produce studies on monetary policy and other topics important to the Fed.”

Nic is interested in the extent to which this institutional handoff, from the defense department to the Fed, played a role in the relative weight given to monetary and fiscal policies in MIT’s macroeconomic theory since the 1960s.

Another important development in Nic’s account is the dissolution of the New Deal’s Reconstruction Finance Corporation (RFC), which loaned money to state and local governments to finance public infrastructure projects.

“The problems of the 1970s and 1980s—inflation, the oil crisis, the global grain shortage—all of those could have been handled smoother had the RFC still been around.”

And, Nic argues, macroeconomics would look very different today. For one, there would not be the current fixation on central banks and markets and interest rate manipulation as solutions to economic problems.

“MIT economists like Paul Samuelson and Robert Solow thought about the economy the way they did because of the institutions they worked with,” Nic says. “They were not revolutionaries; rather, they looked to the institutions that already existed, and whether they realized it or not, their approach to economics was influenced by the needs and outlook of those institutions. The president calls you up, asks you how to handle a crisis, and you’re just ‘thrown’ into the fray.”

Nic, who attended the HOPE Center’s Summer Institute in 2015, has been going through the Samuelson and Solow papers in the Economists’ Papers Archive housed in Duke’s Rubenstein Library, along with the papers of another MIT economist, Franklin Fisher—“an underappreciated and important business consultant who helped shaped our ideas of contemporary monopolies,” Nic says.

Nic will return to Chicago in April.