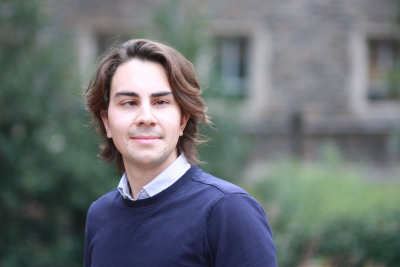 “It’s a fascinating area of what economists do outside the scholarly discipline,” Edoardo says. “What is the nature of the testimony economists give? How do they use economic theories and models in the courtroom? Are their economic arguments different in a trial than in an academic setting?”

Expert testimony must meet certain standards in order to be admitted in a trial. “But what makes an economic model or theory successful in a courtroom is often different than what makes it successful in academia,” Edoardo says.

As Edoardo points out, economists are batting only .500 when it comes to getting their testimony admitted. The models they rely on are often faulted for being too sensitive to changes in the underlying assumptions and hard to test empirically.

Judges are the ones called on to evaluate the economist’s models and testimony—judges who may have no professional training in the methods and standards of academic economists.

Edoardo, a PhD student in economics at the Tuscan Universities (Florence, Pisa and Siena) as well as an avid guitar player and songwriter, hopes to provide judges with a new method to evaluate expert testimony.

One of his proposals is to make it explicit what kinds of claims a judge must evaluate. The other is to use court-appointed experts who can help judges understand and assess complex economic evidence.

Edoardo became interested in how economic testimony is used and evaluated in courtrooms through an interest in the philosophy of scientific models.

“I’m interested in epistemological dimensions of models, so looking at how models are used in antitrust cases provides insights on those issues,” says Edoardo, who, before coming to Duke for the year, spent six months at the University of Helsinki working on his dissertation. “Plus it’s an area of economic activity that not many people have looked at.”

In many trials, Edoardo explains, one economist can be found testifying for the defense while another testifies for the plaintiff. “Being able to compare those cases is especially interesting, as economics gets used to support opposing arguments.”

This is Edoardo’s first visit to the United States. Although he admits it has been harder to get around without a car than he expected, he very much appreciates the kindness and down-to-earth character of the people.

“Being in graduate school, you’re not really a student in the normal sense of the word, but you’re also not a full-fledged scholar. But here at Duke people interact with me as a colleague, as a fellow historian and researcher.”

Edoardo, who was born in Florence and raised in Quarrata, will return to Italy in April.